About the Exeter Flotilla

The Exeter Flotilla is an association of retired Commissioned Officers of all ranks and specialisations of the Royal Navy, Royal Marines, and their Reserves.  The history of the Flotilla dates to before the Second World War.

A typical meeting commences at 1730 in the bar, followed by dinner at 1830, then a lecture at 1930.  Lectures are usually on a naval or military subject given by a serving or retired senior officer, or perhaps a university lecturer.  The annual highlight is the Patron's lecture, when COMLSG gives a presentation on the Group's latest deployment.

Other events include the Annual Dinner, at which the RM Band provides musical entertainment; the Corps of Drums perform 'Mess Beatings' before dinner and a string quartet plays light music during the meal.  The guest of honour is usually a serving senior officer and, before the speech, the port is passed and the loyal toast is drunk in true naval tradition.

The annual Golf Match and Summer Dinner takes place at the East Devon Golf Club, Budleigh Salterton.  An informal event, the dinner is enjoyed by golfers and non-golfers alike.

The annual Trafalgar Service at Exeter Cathedral is the Flotilla's flagship event.  Attended by the Lord Lieutenant of Devon, the High Sheriff of Devon, the Lord Mayor of Exeter, senior RN and RM officers, and contingents from BRNC Dartmouth, HMS Raleigh, and HMS  Vivid.  Music is provided by the Band of Her Majesty's Royal Marines, Lympstone, and is followed by a Civic Reception in the Chapter House.  The Flotilla is pleased to donate its share of the collection to the RN&RM Charity,   In 2019 £300 was raised.

In 2019 Flotilla members had the opportunity to visit HMS Defender at Portsmouth and Lambeth Palace in London.

Membership, which stands at about 120 officers who live in Devon and Somerset, may be of interest and benefit to officers leaving the service and intending to work or live in the West Country.  The annual membership fee is £25.  Officers interested in membership should complete the Membership Application form. 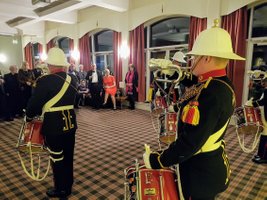 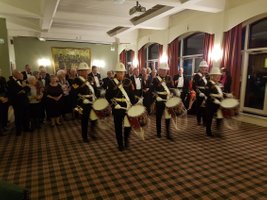 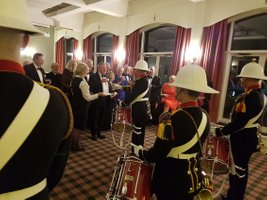